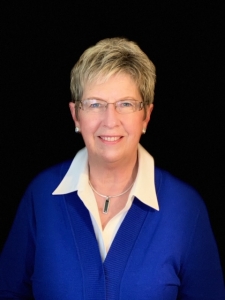 Community, service and leadership are three words that begin to introduce you to Carol Gilbert.

Carol grew up in Palos Park, Illinois, graduating from Carl Sandburg High School in 1967. She earned her Bachelor of Science in Home Economic Journalism at Iowa State University in 1971.

Following graduation, she married husband Charlie, and together they made their home on a farm south of Iowa Falls.

Carol first job out of college was as Hardin and Story County Extension Home Economist.  She was also a free-lance writer for the Waterloo Courier, Ag Reporter, and Midwest Farmer.  Her work continued as the Iowa Falls Chamber/ Main Street Director then as the Development Associate at Quakerdale in New Providence.

In 2012, Carol was named Friend of Extension by the Epsilon Sigma Phi National Honorary Extension Fraternity in recognition of her outstanding public service and support of ISU Extension. In 2013, Carol was selected as Iowa Master Farm Homemaker.

Carol has always been generous with her time and talents to her community throughout her life and has found great pleasure in being involved in church, civic and philanthropy organizations in many ways.

She has been an active member of the First United Methodist Church in Iowa Falls, having served as Education Director, on Staff Perish Relations Committee, Endowment Committee and was a Sunday school teacher for many years.  Carol has served on the AOII Sorority Corporation Board at Iowa State, the Hardin County and State Porkettes Boards, was a 4-H judge the Iowa State Fair and numerous county fairs, and was a member of the ISU Extension and Outreach Citizen Advisory Council.

Carol’s interests and influence in Hardin County philanthropy is evident in her leadership to help start and grow the Hardin County Community Endowment Foundation, serving on the board for 9 years and serving as the Board’s first President. In 2013, she was a co-founder of 100+ Women Who Care Hardin County.

Carol is currently a member of the Isabella Literary Society; P.E.O. Chapter DV, 100+ Women Who Care, is a volunteer at the Methodist Church Wednesday night dinners and serves as the Chair of Church Women United of Iowa Falls’ Finance Committee.

She enjoys traveling, golf, photography, a challenging game of bridge, attending Iowa State football and basketball games, and spending time with family and her nine grandchildren.

Carol and Charlie believe strongly in the work of foundations and the impact HCCEF endowments are making for Hardin County communities and for the charitable organizations that serve those communities.

Together, the Gilberts donated $10,000 to start the HCCEF Operating Endowment to help fund with HCCEF’s annual operating budget.  They also established the Charlie and Carol Family Endowment, which provides the Gilberts the opportunity to give 5% of their fund balance every year to a charitable organization(s) of their choice.